The Yellow Press And Their Red Hearts 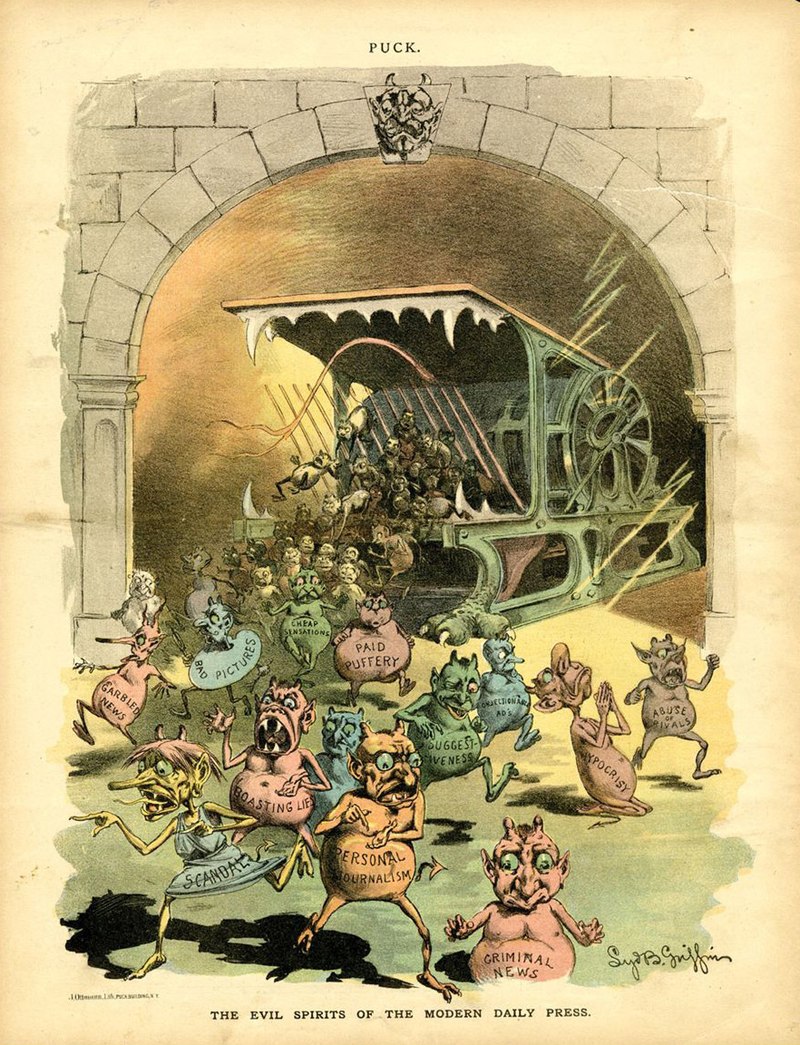 Yellow Journalism is a phrase which means journalism based on sensationalism and crude exaggerations. For instance, Don Lemmon saying that President Trumps wants to incite a civil war or of others who say that everyone who supports him is a racist. This is yellow journalism, and it has consequences because it inflames passions and it creates a false picture of reality. For instance, whole the polls show historic lows in the approval of the President, we have also seen more yellow journalism aimed at the President and his supporters than we have seen since perhaps the 19th century. Every day the yellow press does not fail to make the most strident claims, and when they are proved to be unfounded, the press just move on to the next allegation.

Yellow journalism can be used to “sell papers”, the more sensational stories get more interest, and therefore more people buy the paper. Some have argued that the press’s massive overdose of yellow journalism vis-a-vis the President is designed to get them ratings. Indeed, MSNBC, which leads with such yellow journalism every hour, is enjoying a boom in ratings, Although fellow yellow journalists at CNN are not enjoying the benefits of their crude exaggerations getting ratings.

While nobody wants a lapdog press who are not willing to ask tough questions, modern reporters claim to be objective and honest. The claim to objectivity has been questioned for decades, a reading of how they cover news and what they choose to cover shows charity toward the left and tough skepticism toward the right almost every time. But journalists never seemed to care that their objectivity was questioned, they live in a world in which the left-view of things is not merely deemed one way of seeing things but the only objective way of seeing things. So, they can both lean hard to the left AND claim to be objective because, to them, being hard to the left is really the only objective and legitimate point of view.

But now the press are feeling the sting of being called dishonest. If indeed people are convinced that what the press are saying is not in fact trustworthy in its facts, let alone its bias, then the power of the press to control the debate and set the narrative would diminish. And, make no mistake, the press do exist for corporate interests who want to control the debate and set the narrative. Why else would international corporations of immense scale be the owners of most media, and why would they have been funding these operations even when they lose not millions, but billions of dollars? Why would the owner of Amazon be so heavily invested in the Washington Post, the virtual trumpet of the yellow press’s charge against all things conservative?

The relationship between the press, the corporate world, and the government is grossly incestuous. The leading lights of those worlds all revolve between the three spheres with ease and the line between corporate bigwigs, journalists, and political hacks is becoming ever more blurred. These are generally wealthy people who rely on a corporate system that itself relies on either government largess and juicy contracts or the favor of regulations that stifle competition from upstarts. The mega corporations and modern robber barons who now run our social media and control most online shopping also control the news media and sit on corporations and fund and control political organizations. It is all one big party, mostly at our expense: workers are paid less and less and must compete with a global market on unfair terms, consumers are sold junk and over-charged for items quite cheaply made, and the politicians turn most producers into tax farms using their money to subsidize voters.

The long-held suspicion that most journalists were more like Marx than Pulitzer may or may not be true in the case of individual journalists. What we can see, and say with confidence, is that the interests of the controllers of the press, which is resorting to yellow journalism against all conservatives, align exactly with those who use the government to feather their own nests in both the corporate world and among the two major political parties. While certainly it seems the right are coming in for the worse of it at the hands of the yellow press, this bias is not as political as it might seem. This bias against the right only stems from the fact many of the policies groups like the Tea Party would pursue would dramatically reduce the ability of the elites to farm the producers for taxes, use the government as a sinecure or at least to regulate away their competition, and fund the buying of votes to keep this whole gravy train going.

It isn’t for Marx or Marxism that this is happening, and while the left are the ones currently being favored, or, rather, USED, and the right are the ones being smeared and slimed, the motivation is not ideological. It is based on the raw lust for more wealth and more power. It is not enough that the likes of Jeff Bezos or George Soros have more wealth and power than anyone can imagine: they want more and more and more and are extremely jealous of anyone who has even a small portion of what they have as well as being extremely vigilante against any potential threats to their monopolies of power.

It is supremely ironic that the champions of capitalism who are accused of being for the super rich over the poor are attacked by the leftist yellow press which is actually doing the work of advancing the advantages of their super rich billionaire masters. The rank and file communist, antifa member, BLM activist, or Democrat for that matter may sincerely embrace forms of collectivism, but the bills which underwrite both their activities and the massive propaganda machine that trumpets them and attacks their opponents, are being paid by the richest of the rich for the benefit of the rich. One wonders if these modern robber barons laugh themselves to tears as they watch paid leftist agitators declaim against capitalism and the rich, while essentially attacking the only people who would actually end the media-corporate-government gravy train once and for all.

The heart of a typical yellow press reporter might be red, but the heart of their masters is a sickly money-grubbing green.

Check out any website’s traffic, keyword placement, and links-

DANGER TO YOUR WEB PRESENCE COULD BE LURKING!
Do you REALLY know what your web presence looks like? You could have serious problems and not even know it!

You SHOULD be checking yourself out!